If Stones Could Speak 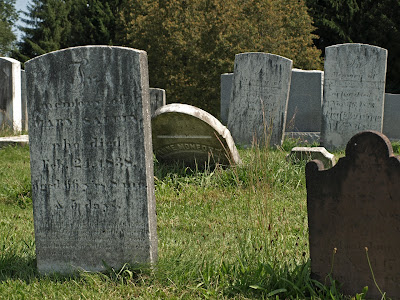 "The dead are sad enough, in their eternal silence."
—Maurice Ravel

Near my house in Dutchess County are several old rural cemeteries.  One of the two closest is the Verbank Rural Cemetery, with a quaint covered entrance and gravestones winding upward to views of Verbank and the surrounding hills.

The cemetery seems to have begun as a burying ground for the Vail family.  One of their number fought in the Revolutionary War; another is presumed to have died in the War of 1812. 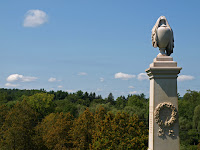 If the size of the monuments is any indication, the family either included masons or was prosperous for many years.  For the most part, though, the story that survives seems confined to names and dates on gravestones and meticulously compiled genealogical records that contain the barest of facts. 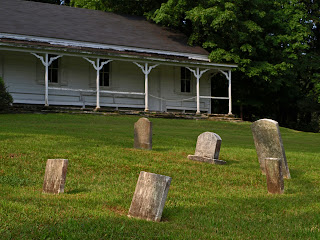 The other nearby cemetery adjoins an old Quaker meeting house.  The house is little used now, in middling repair, at best, and the graveyard occupies its front lawn.  The Oswego Meeting House was a stop on the Underground Railroad during the American Civil War, but no trace of its noble history is evident on walking the grounds.  If only stones could speak—or sing or wax poetic in the manner of a French tombeau.  Instead, all that greets the visitor is the “eternal silence” of the dead. 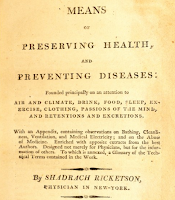 A pamphlet about the meeting house that’s found its way to the internet proclaims that “possibly the most important personage associated with it” was Shadrach Ricketson.  Ricketson was a doctor who, in 1806, wrote “the first American book on hygiene and preventive medicine.”  The book was entitled Means of Preserving Health and Preventing Diseases:   Founded principally on an attention to air and climate, drink, food, sleep, exercise, clothing, passions of the mind, and retentions and excretions, and “with an Appendix, containing observations on Bathing, Cleanliness, Ventilation, and Medical Electricity; and on the Abuse of Medicine."  I don’t know where Ricketson is buried, but surely, based solely on the title of his book, he deserves a tombeau of his own. 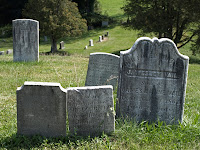 The tombeau, as a form of music, appears to have got its start in the 17th century.  It died out at some point, then came back again with pieces like Ravel’s Le Tombeau de Couperin.  Ravel’s statement on eternal silence is said to be his reply to the criticism that his tombeau, commemorating friends who died in World War I, was too “light-hearted” for its task.  As I walked through the cemeteries, I found I agreed with Ravel.  After all, what are these stones now?  Only stones.  Names and dates remain legible on some of them, but what do they tell us about the person buried there?  Not much.

As I returned to my car, I heard a hawk squealing from a treetop.  I was glad for the sound after all that silence.  I wondered:  if stones could speak, what would they say?  What might they sing?  What instruments might they play? 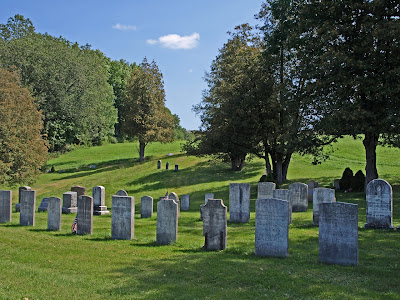 
To hear a jazz version of the Prélude, click here.

Email ThisBlogThis!Share to TwitterShare to FacebookShare to Pinterest
Labels: history

I love cemeteries. I have actually been all over Canada and done research in different cemeteries. They are fascinating when you know what to look for. Some of the most famous people in history have nothing written on their stone while others who were quiet and made little noise in life have long epitaphs.

Hello Susan:
What a very moving and thought provoking post. Like you, we find cemeteries fascinating, and very peaceful, places in which to be and do find it interesting to reflect upon the lives of those who have lived before us.

The Quaker Meeting House looks delightful and should, we feel, be restored and preserved.

Hi Susan .. what a wonderful post - so interesting .. and yes I wonder what the stones could tell us.

Over here they've been doing some 'cold cases' I wrote about one under Stirling Castle .. but perhaps our records are better kept and have been going for longer - they had to be real detectives and 'rather clever'! But I find these cases fascinating at what they can relate about a person .. even if we didn't know much about them .. the diet, where they came from etc etc .. by science.

The names on gravestones are fascinating too .. the ones here in the UK, and I loved the little churchyards in South Africa, much as you've described here ...

Musical instruments - now that's not in my repertoire sadly, but I love reading and learning a little more ... eg tombeau - usually played on the lute I see ..

Love the pictures and the information .. cheers Hilary

'After all, what are these stones now? Only stones. Names and dates remain legible on some of them, but what do they tell us about the person buried there? Not much.'

I think these people continue to reverberate through the living. Through a post such as this one. You have been a channel, Susan.

Unless the verses on the tombstones are really quirky, all they speak of is human vanity - and as for big monuments, well, I'm glad of them, but the only ones I think hit the mark are the ones which have the courage to show decaying corpses in stone.

The setting is, of course, something else - these look beautiful.

This is a very beautiful and simple cemetery you show here.
In the UK cemeteries have a neglected, unkempt feel about them, French cemeteries remind me of prisons and German cemeteries are neat and tidy and manicured to within an inch of their 'lives'. (deaths?)

All the same, I love visiting them and reading tombstones as far as one can. Cemeteries lend themselves to much contemplation and rumination.

Your question is for the composers out there. Interesting how we find the forlorn look of those old leaning stones beautiful. Falling over, overcome by weeds, eventually swallowed by forest or mowed over, even the markers disappear without a trace....

This is wonderful. I don't think the dead are sad at all. What did Dumbledore say? Something like,"Don't pity the dead, Harry. Pity the living."

What a lovely blog! Wonderful pictures and text. I love all your quotes.

Von: Always nice to see you stop by!

Birdie and nothingprofound: Welcome, and thanks so much for commenting. I’m pleased you enjoyed the post.

Jane and Lance: Yes I do hope the meeting house will be looked after. It has a great story and deserves to be preserved.

Hilary: Your post on the Stirling Castle “cold cases” is full of great tidbits (for curious readers, it can be found here). How ever did they figure out the skeleton was a fish eater?

Suze: Oh, I’m not the least suitable for channeling—remembering, or searching out history, perhaps, but channeling is a bit outside my line. That said, I’m pleased to have unearthed Shadrach Ricketson. Quite a fascinating character, don’t you think?

David: You did get me laughing with your comment. I’m afraid there was nothing so delightfully graphic in these two graveyards!

Friko: I so enjoyed your descriptions of the differences among British, French, and German cemeteries. It reminded me of a holiday (imagine!) in Ypres. Of course this included walking through many graveyards. Though in this case all were tidy, they did have different characters by nation. I was particularly struck by the Langemarck German cemetery, dark and brooding, with heavy crosses and flat stones. Ypres had not been my choice of a vacation spot, I must say, but what I saw and learned there made a powerful impression.

Mark: You have graced my little post with a lovely bit of poetic language, describing so beautifully in words exactly what I hoped to convey in the photograph I chose for the head of the post. As for the instruments: looking back on the image of the long rows of stones at the end of the post, I found I was imagining them animated, bouncing back and forth, playing washboards and zithers and fiddles and singing up a storm. A little antidote, I suppose, to all that silence.

Maggie: You make a good point (though I do think Ravel’s comment was an appropriate retort to the silly criticism about his musical homage to lost friends). The dead, after all, are simply dead. It’s the living who have thoughts and feelings about it all.

Hi Susan .. re the Stirling Castle post I wrote up ...

I actually set the details out quite clearly .. explaining how they found the information as I guessed that I'd find it a useful resource - when I came to write other articles.

So it does go through how they worked out what and why he was who he was ... obviously not as good as the programme, or in that much detail .. but the bare bones!

They can work it out through the isotopic testing .. mineral analysis ... of bones and teeth.

I remember spending quite a lot of time on the post translating what I'd seen on the tv into an informative post - I have to say I refer to it quite often ..

Glad you enjoyed it .. if you can have another read through, I think you'll be a little more enlightened.

Many thanks - so pleased you went through to have a read ... cheers Hilary

Hi Susan,
What a thoughtful and indeed, thought provoking posting. A stirring article that will make me think of what marvellous thoughts and sounds could be revealed if the stones could speak.
May you have a peaceful time on this most poignant of weekends.
With respect and kind wishes, Gary

Gary: Thanks for coming by. I'm glad you enjoyed the post, and best wishes to you, as well.

I always have something to say, but I brought a dear friend with me today, because his words express so much more gracefully and profoundly what I think about all this. Since the ghost of Prufrock is wafting about, I don't think you'll mind a little snippet from "Little Gidding".

If you came this way,
Taking any route, starting from anywhere,
At any time or at any season,
It would always be the same: you would have to put off
Sense and notion. You are not here to verify,
Instruct yourself, or inform curiosity
Or carry report. You are here to kneel
Where prayer has been valid. And prayer is more
Than an order of words, the conscious occupation
Of the praying mind, or the sound of the voice praying.
And what the dead had no speech for, when living,
They can tell you, being dead: the communication
Of the dead is tongued with fire beyond the language of the living...

Oh yes, it is. Thank you for this beautiful post.

shoreacres: Mind? I should say not! How perfect that you thought of this quotation to grace this little post—and you have sent me rushing to the bookshelves to find my copy of the Four Quartets!

I wonder if Ravel was echoing a famous line of Pascal's: "Le silence éternel de ces espaces infinis m’effraie," or "The eternal silence of these infinite spaces frightens me." If I remember correctly, that was Pascal's reaction to looking out upon the starry universe at night.

I mostly do nature photography, but a few months ago I created what you might call a visual (rather than musical) tombeau of my own, which you can see at

Thanks for your literate take on cemeteries near you.