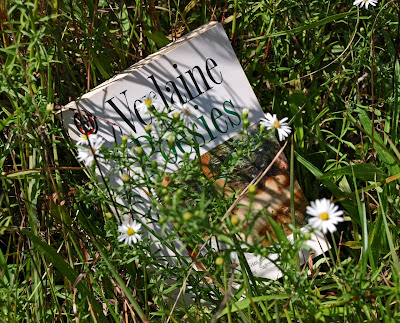 Verlaine ? Il est caché parmi l'herbe, Verlaine
—Stéphane Mallarmé
Long ago, I sat in a circle of fifteen girls as Madame __, her hair brittle with red-orange dye, put us through French conjugations.  I hadn’t much patience for the grammar, but I loved the sound of French words, the epitome of which seemed, at the time, to be Paul Verlaine’s Chanson d’Automne:

Here's an audio of the poem read in French:


While I had only a sketchy understanding of the French, it didn’t matter.  The rhythmic keening of the words was all I required.

I knew nothing of the poet’s story.  Verlaine was only a name.  (I learned something of him recently, through the backdoor of learning about Rimbaud.  He seems to have been a pathetic mess of a human being and, not to put too fine a point on it, a bit of a jerk.  In reading Verlaine’s poem, his life may be best left out of it, as the poem stands admirably on its own.)

I often wonder what I’m missing when I read poetry in translation.  Friko, whose blog Friko’s Poetry and Pictures contains a brilliantly eclectic selection of poems from around the world, wrote incisively on that point:


Translating poetry can only be done by a poet.  Even then the poet will be of his own time and use words which belong in his own time.

To do the poet to be translated justice the translator has to immerse himself not only in the poem but also the culture, the life, the literary language, the history of the original poet.

For years I have been searching for translations of poems from German into English and vice versa, without great success.  There is always something lacking.

Though I haven’t facility in other languages, reading translations of Verlaine’s Chanson d’Automne provides a hair-raising case for Friko’s point.  Here’s a literal rendering of the first stanza in English:


The long sobs
Of the violins
Of autumn
Wound my heart
With a languor
Monotonous.

Now consider these translations, none of them by fools, so far as I know:


Leaf-strewing gales
Utter low wails
Like violins,--
Till on my soul
Their creeping dole
Stealthily wins....


When a sighing begins
In the violins
Of the autumn-song,
My heart is drowned
In the slow sound
Languorous and long.


The long sobs of
The violins
Of autumn
Lay waste my heart
With monotones
Of boredom.


The long sobbing
Of autumn strings,
Grievous,
Wounds my heart
With a languor that
Is monotonous.

With the possible exception of Symons, they each fall apart, particularly at the stanza’s close.  (And Hall has gone off and written an entirely different poem.)

In 1895, a reviewer of Hall’s translation of one of Verlaine’s poems wrote:


the translation is done as well, perhaps, as it might be done, but it is not done at all, and it is not the translator’s fault, and there is nothing to be done except not translate Verlaine.


Where in French there is so little emphasis that the mind glides effortlessly along, in the English there is a harsh definiteness, which lends a peasant dignity (or a pedantic heaviness) to things. . . . English can turn Verlaine’s lightly brushed-in atmospherics into an earthbound plod.

I don’t like the idea of losing hope, but it does seem that, even in the most thoughtful English renderings, Verlaine’s music disappears—or at best is hidden in the grass.
<<<>>>
Postscript:  Even history had a go at the poem:  it was used to signal the French Resistance of the coming of D-Day.

(The translation of the first stanza used in the video is almost identical to the literal translation and, to my mind, an improvement on those previously quoted.)

Chanson d’Automne has been set to music repeatedly.  Frederick Delius, Gabriel Dupont, and Benjamin Britten set the poem, though classical composers by no means have a lock on it.  Charles Trenet’s version is a charmer, and Léo Ferré’s eccentric approach has appeal as well.  Both can be heard below.  sToa and The Last Hour, both of which are categorized as darkwave (but don't ask me what that is), have versions and, for those who are inclined toward post-metal (don't ask me what that is, either), there is a version by Les Discrets.  And then we have Dominique Pinon, whose real claim to fame may be as an actor in “When Evil Calls (2006), the world's first horror series for mobile phones.”

For those with Spotify, click on Chanson d'Automne for a collection of musical versions of the poem.

Credits:  The quotation from Mallarmé is from Le Tombeau de Verlaine; the English translation of the poem (and the line that is the post’s title), by A. S. Kline, can be found here.  The Verlaine poem in French is from Verlaine Poésies, Édition J’ai Lu, 1998. The reading of Verlaine's poem is by Nathalie Mussard, courtesy of LibriVox.  The quotation from Friko is the first comment here.

Email ThisBlogThis!Share to TwitterShare to FacebookShare to Pinterest
Labels: poetry

Every language has its own character. Surely a good poet will bring out the particular qualities of the language in which they write.

Perhaps the best way to handle translations would be to take a literal translation and read it at the same time as hearing the poem read in its original language.

After all that is how we do understand a foreign language - not by making direct translations, but by understanding how the meaning emerges in that language's characteristic way.

I think a translation is arguably its own poem.

(Sorry I am so late in commenting; I've been finishing an article for which the deadline is NOW.)

Susan, I must most heartily thank you for proving my point. None of those translations quoted comes anywhere near the easy, light as air, lines of Verlaine.
The subject is bitter-sweet, why did not one of the translators bring out the melancholy notes?

Best thing is, just learn the language if you're interested in the poet.

I learned French from Verlaine (and Faure and Debussy). His poems have been successfully set by other composers too. That's the closest "translation" that I think can be applied successfully to Verlaine!

Here's a listing of 142 settings of his poems:

Fascinating points. I reckon every book of translated poems should have the original on the opposite page - if only there were world enough and time for us to be conversant in all the languages of the poets we love. I get a sense of it when listening to musical settings with the translations to hand - do you know George Crumb's Lorca, for instance - but I do feel the want of a basic grounding in, say, Spanish.

Friko is right - you should learn the language of the poet if you want to read them, but even that is not fool-proof. Some poets make heavy use of native colloquialisms and patterns of speech. Still, it's the best way. I prefer books that place the translation on a page opposite the original, so that I can plod in my clumsy way through the French, German or what have you. But since English is the only language I am fluent in, I focus on poets writing in English. I know I'm the poorer for it.

On a side note - do you highly recommend spotify? I listen to grooveshark quite a bit. Are you familiar with it and think spotify is preferable?

I'm sure Sue will come back to you, Mark, if she's a regular user of Spotify, but I can vouch that it has a pretty extraordinary catalogue - I use it to hear pieces I need to hear immediately, and I've given up buying the mp3 downloads (Amazon is better for that).

As for poetry on Spotify, of that I'm not qualified to speak. I don't know Grooveshark but why not have access (free, of course) to both?

You have another winner! Listened to both renditions and admire the clearly pronounced words and phrases. It was fun to read the poem while listening to the singers. If I repeated the process often enough it might be possible to acquire a passable French accent!

Right from the photo at the beginning of the piece you had my attention. All I can say is, "Brilliant!"

I agree those original French words convey a poetic image impossible to re-create in translation. You took me back to my schooldays when I first heard their music. Thanks.♥

Oh my, perhaps a case of lost in translation.
And now I've got memories of French class and conjugating the verb être.
Mon dieu....

To all: Your perspectives on handling (or not handling!) poetry in translation are wonderful and greatly enhanced my little post.

To each in turn:

Jenny: Thank you for stopping by. How right you are that every language has its own character—and hence the problem in trying to translate. White’s description of English in that regard was one I was particularly pleased to find.

Suze: I think you make a great point, certainly for poems that succeed as poems in translation. One that comes to mind for me, ironically enough, is Wislawa Szymborska’s “The Joy of Writing,” which I discovered through Friko’s Poetry and Pictures blog. I haven’t a scrap of Polish by which to test it against the original, but I loved the English-language poem.

Friko: And the language I really would love to learn, therefore, is Chinese. (This, however, seems just a tad unlikely . . .)

Elaine: That’s a wonderful site, which I only discovered as I put together this post. Isn’t it interesting how many settings there are of Verlaine? I love the idea of learning French through musical settings of French poets.

David: Of course, I had to race right over to Spotify to listen to George Crumb's Lorca, which I didn’t know at all. (An example of what you noted about Spotify. It’s great to be able to follow a musical suggestion just like that. Now if only the text popped up while I listened . . .) I agree that all translated poetry should show the original side-by-side, and I would go one further: at least when I was reading translations of Chinese, I really longed to see both the characters and a literal translation of their meaning (to the extent such a thing can exist).

Mark: Since I have a remnant left of French, having the original on the facing page is definitely useful. Less useful if the original language is Greek (thinking of Anne Carson) or Chinese, though, as I noted earlier, there I’d love to have both the characters and a literal translation of their meaning.

cybersr: Among other things, I’m pleased you enjoyed the photograph. It was fun to try and set up a photograph that worked—and, as usual, I had to take many to get one that “passed.”

jinksy: Ah, schooldays French. Glad the memories for you were good ones—mine, too, although, as I’ve noted, my memory of what I learned back then is miniscule, and the grammar is entirely gone.