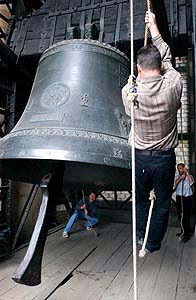 Ravel wrote most of Le Tombeau de Couperin in 1914, before the outbreak of World War I.  His initial intention had been “a set of dances modeled on French baroque dance suites,” most notably the Ordres of François Couperin.  Time caught hold of Ravel’s intention, and he ultimately offered each of the six pieces that comprise Le Tombeau in remembrance of friends and colleagues who died in World War I.

The tombeau, while dormant for a while, proved too evocative a musical idea to be defeated by mere time.  Nine years ago, Judd Greenstein completed his own, Le Tombeau de Ravel.

Greenstein’s tombeau, like Ravel’s, got caught in the tide of time.  Greenstein's own words describe it best:


The Fall of 2001 was a difficult time in my life, a time that was centered around events relating to death and dying.  My mother had been killed in a car accident the previous year and my grandmother was in the hospital with little hope for survival; the second Palestinian Intifada had been raging for a year in Israel, with death tolls mounting on both sides of the struggle; and the September 11 attacks on New York City had struck close to the downtown Manhattan apartment where I grew up, and where I was living at the time.


I had written a short work for piano trio that I considered a major step forward in my compositional development, and which I had hoped to at some point turn into a longer, multi-movement piece.  The short movement was loosely based on the first movement of Ravel's Piano Trio, one of the most important pieces of music in my life, and in 2001 it seemed appropriate and necessary to finish my own trio.  Ravel had written his own memorial work in 1917, Le Tombeau de Couperin, dedicating each movement to friends who had died in World War I; I turned to this work for its memorial quality, and to the Piano Trio for its musical framework.

In finishing the piece, Greenstein writes,


I left the first movement as I finished it in 1999; in this way, the work also deals with memory, and helps me personally to bridge the gap between two very different periods in my life.

Greenstein’s Le Tombeau de Ravel is as beautiful as it is poignant.  I’m grateful he’s made the accomplished and sensitive performance by the New Century Trio available on his website, as the piece doesn’t appear to be available in any other form.

I hope that changes soon.  Greenstein’s Le Tombeau de Ravel speaks with grace, eloquence, and wisdom to the human condition—to grief and memory and the changing tides of life.  It is essential listening, and we need it to endure.  We’ll all be the poorer if it does not.

The provenance of the photograph of the bell-ringers in Prague is unknown.  It is one of many photographs commemorating the unbidden generosity of people all over the world in response to September 11, 2001.
<<<>>>
To hear the 1st Mvt (Modéré) of the Ravel Piano Trio, click here.

Hello Susan:
What a partisularly sensitive and appropriate post at this particular time of remembrance of the atrocities of 11th September.

Judd Greenstein was, until now, completely unknown to us and so we are very grateful for the introduction.

I must come back and listen to the Greenstein piece .. I know I can find informative passion here as well as links to excellent musical works ..

With thoughts for this weekend - Hilary

'The short movement was loosely based on the first movement of Ravel's Piano Trio, one of the most important pieces of music in my life, and in 2001 it seemed appropriate and necessary to finish my own trio.'

Strange how beautifully intertwined we all are, in passion, in the drive to weave meaning into our world, in the mania to create, sustain and bring lasting impact. To something.

Thank you, Susan. I'm going to listen to this now as I read 9/11 remembrance poetry.

To all: Thanks, as always, for your lovely comments.

Jane & Lance & Hilary: I hope you will enjoy Judd Greenstein’s work. He has to my mind, a set of beautiful chamber works. I hope he will be able to record a CD of them someday soon.

Suze: Your comment in reacting to Greenstein’s on the Ravel Piano Trio is a wonderful observation, and beautifully stated.

Mark: Poetry and music, an exquisite pairing for the day (or any day).