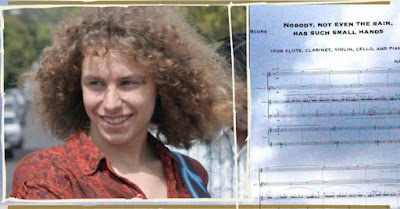 During intermission at a recital, Dylan Mattingly bounded over to his red and black-trimmed bag and pulled out a huge manuscript.  Its spiral-bound cover mimicked an atlas, and within it was a score-in-progress for the composition he’s been working on for most of the last two years.

At twenty, Mattingly may be young in his composing life, but his music roams deep into the by-ways of American music.  Among other influences, including Olivier Messiaen, John Adams, and Magnus Lindberg, he cites “Joni Mitchell, and the old American blues and folk field recordings of the Lomaxes.”

Mattingly lived in Berkeley, California, until he came east to attend Bard’s Conservatory of Music.  The titles of some of his compositions reveal the pull of home.  The subtitle of Lighthouse, for example, is “Refugee Music by a Pacific Expatriate.”  In this evocative piece, I can hear fog slipping into San Francisco Bay.  Barges pass under the Golden Gate Bridge while gulls soar overhead; passers-by lean on the railings, staring over the water, into space.

The notes, rhythms, and tonal colors of Mattingly’s music spin out associations with centrifugal force.  On listening, for example, to Going to Where the Rain Falls, I’m transported to a levee, following along behind a backcountry band that’s been playing all night but ain’t done yet.  There’s a fellow with a fiddle resting on his shoulder, and someone pushing an old ebony upright with its stool perched unsteadily up top.  Someone else lifts a trumpet for a desultory blow, another grips a clarinet, another holds a flute.

There’s a troupe of them, ambling along as the sun comes up.  They slide into place in a ragged circle, and the piano player plunks out a fractured blues-y phrase or two.  They lift into music and fall out again.  They take their time, noodling around until they've summoned up energy enough to let out a manic rush of notes.  Almost at the last, a freight train, its whistle blowing, sets the tracks clacking, and the players lay down their instruments to listen.  They catch hold of its pitch and rhythm and join the train’s music as it fades away.

Mattingly’s music travels ever onward, exploring new terrain:  from one coast to the other in the United States, and now to points on the Atlas of Somewhere on the Way to Howland Island.  The fine ensemble Contemporaneous describes the piece this way:


This epic and beautiful forty-minute poem for chamber orchestra is an emotional depiction of Amelia Earhart’s final journey.  You can hear Earhart's journey in the music:  her engine revving, crossing the endless blue, a stop in Tahiti, an elegy at the tragic end to the flight.  The finale, though, features an incredible build to an overwhelmingly jubilant climax that sends Amelia's spirit out into the stars.

Entire strands of American music live in Mattingly’s compositions, but his is not a nostalgic venture.  Mattingly carries the American vernacular with him to create music that’s ebulliently his own.  On September 24, I look forward to accompanying Mattingly and Contemporaneous on the next voyage out—into the stars. 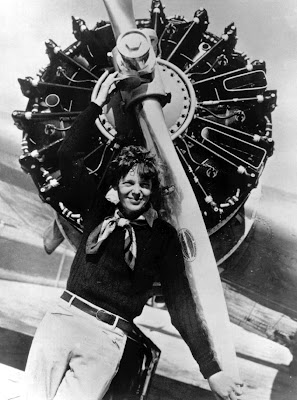 Contemporaneous is premiering Atlas of Somewhere on the Way to Howland Island at Bard and in Brooklyn, New York:

The program, entitled The Roots Run Deep, also includes performances of Gabriella Smith’s  Kisiabaton and Shawn Jaeger’s Letters Made With Gold.  To learn more about the program, click here.

Audio of works by Dylan Mattingly, including Going to Where the Rain Falls, can be found here.
Posted by Susan Scheid at 8:26 PM

'On listening, for example, to Going to Where the Rain Falls, I’m transported to a levee, following along behind a backcountry band that’s been playing all night but ain’t done yet.'

I love the way you articulated this. I have, more than once, typed in the comments section of other blogs that the post had perfect-pitch but that was before I read this one. There aren't degrees of perfection, are there?

Hello Susan:
It is always so exciting to come across young people, and we believe that there are a great number of them, who display talent in the order of that which, so very obviously, Dylan Mattingly has. This post has been a wonderful, insightful introduction to a musician about whom, prior to this, we knew absolutely nothing.

Susan:
Sorry to have been out of touch. I still am reading Prufrock's, I just don't always take the time to formally comment.

Glad to see you are still investigating music and writing about it for all of us!

Talk about a promising start in life. Damn. I'm going to have to keep a little black book to stay on top of all the music you're turning me on to. I listened to the tracks on Mattingly's website, particularly liked the 'City Light Dreams from a Foggy Pacific" pieces - really nice compositions.

Your descriptions of music are excellent too. Thanks again, Susan.

Tomorrow, dear Susan, tomorrow.
This needs more time than I have at present.

Thank you so much, as always, for opening up the wide vistas that have long been in my peripheral vision.

Sounds like he's in the good ol' American visionary tradition (why did Crumb keep coming to mind?) I'd better go listen when I have a spare half hour.

Hi Susan .. such great descriptive words here .. and I can now see a story in the music .. and Dylan Mattingly's scores seem to be wonderful adventures ..

I definitely will need to come back when I'm organised to look into music .. this post was wonderful ..

Hm, I hope this young man makes it and doesn't sink into obscurity like so many 'new' composers.

There is a wealth of talent around, much of which will settle down into teaching and playing the music of others for their bread and butter and compose electrifying music as, sadly, a sideline.

Mattingly is very promising, I don't know how well known he is in the US. Posts such as yours can only help him on his way.

Hi Susan,
What a fascinating article you have submitted. I've never heard of Dylan Mattingly, but your glowing endorsement of such talent has heightened my curiosity to find out more information on his music.
And anyone who has been influenced by that fine Canadian singer, Joni Mitchell, is definitely okay in my books.
With respect, Gary.

Suze: Wow, I’m wordless! I really struggle with describing music in words, so it pleases me no end that you think, in this case, I may have hit the mark. Thank you!

Jane and Lance: It’s exciting and enormous fun to witness the bright blaze of such creativity. You are right, there are many young, fresh, and talented composers out there today—the challenge for us as listeners is to try and keep up!

WOS: Nice to hear from you, as always. I hope you’re having fun with all your new projects, as I am with this. Send me news of what's up, when you have a chance!

Mark: Believe me, I could use a little black book, too. (Actually I have one, but then there’s that tricky business of remembering to make a note.) The “Foggy Pacific” compositions of Mattingly’s are particularly interesting, I agree, and I’m pleased indeed that you took time to listen and found something you enjoyed.

Maggie: And isn’t it great (thinking of Punk Rock Girl, by the Dead Milkmen, on your listening list), as we all have such different interests and perspectives, to be able to share and learn from one another?

David: “good ol' American visionary tradition,” yes, Mattingly is definitely in that line. Though I’ve listened only to a bit of Crumb so far (some of the Lorca settings you noted, and thank you for that), I’m not surprised he came to mind for you. Though their musics may be very different, they are both definitely representatives of that fine tradition.

Hilary: Do I read you are inching closer to a listen of a thing or two? I do hope you find something to enjoy!

Friko: Yes, as you and yours know far better than I, there’s no question, it’s a tough row to hoe. Mattingly, Bloom, and the ensemble contemporaneous are vibrant and engaging communicators and advocates—both musically and personally—so I think that’s got to help. The concerts I’ve attended have been exciting, the choices of music enthralling, and the performances excellent. It’s my sense that, with each concert, they’re building new audience for the music they champion, both here and in New York City, so I have high hopes. The big question for me is what happens when they graduate—in the meantime, I’m glad they’re here in the Hudson Valley.

Gary: I do hope you find something you’ll enjoy. And thank you for the deft reminder that “America” is not just the U.S.: Joni Mitchell is indeed a wonderful Canadian singer and songwriter.

Dear Susan,
thank you for that! I have to confess that the only name I knew is "Jonni Mitchell", whom I love. So nice to have time again to read your beautiful posts! Britta