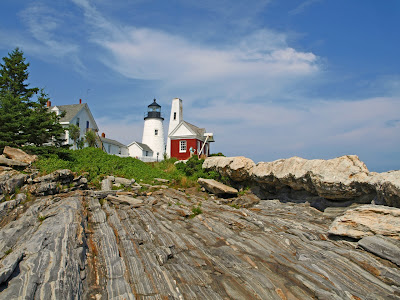 “Clepsydra” is really a meditation on how time feels as it is passing.
—John Ashbery
John Ashbery’s poem, Clepsydra, begins with the phrase “Hasn’t the sky?”  The question, opening out to anywhere, lured me into the poem.


Hasn’t the sky?  Returned from moving the other
Authority recently dropped, wrested as much of
That severe sunshine as you need now on the way
You go. . . .

Clepsydra is the Greek word for water clock.  John Steinbeck used it also, to describe the action of the tides:  "Time is more complex near the sea than in any other place, for in addition to the circling of the sun and the turning of the seasons, the waves beat out the passage of time on the rocks and the tides rise and fall as a great clepsydra." 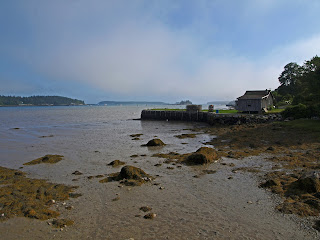 I don’t know whether I agree with Steinbeck that “time is more complex near the sea than in any other place,” but at water’s edge in Spruce Head, Maine, time is definitely marked by the tides. 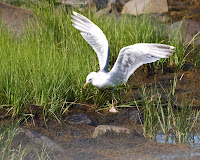 
. . . But the condition
Of those moments of timeless elasticity and blindness
Was being joined secretly so
That their paths would cross again and be separated 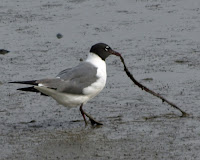 We watched eiders huddle on a rock, guillemots bob in the water, and gulls poke in the mud for food.  Once, a great blue heron stood on the rocks, its feathers drenched, searching for dinner.

A full moon was on the way.  The tide pulled out so far it beached the rowboat near our dock.  Bladderwrack drooped on exposed rocks.  Hours later, the rowboat was again afloat and kayakers took to the water. 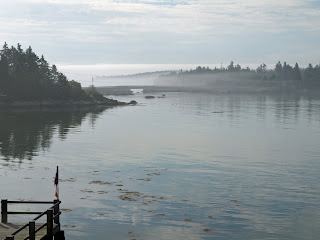 “Hasn’t the sky?”  A good question for the Maine coast, with its changeable weather.  We arrived to clear blue skies, then watched a bank of fog roll toward us, bleeding color from the day.


Too close to be legible, sprouting erasures, except that they
Ended everything in the transparent sphere of what was
Intended only a moment ago, spiraling further out, its
Gesture finally dissolving in the weather. 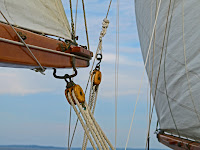 One bright day, we went out on Penobscot Bay in a schooner. 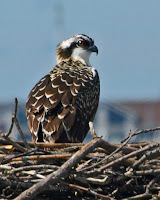 The skipper stole past an osprey nest, eye-level on a rusty tank.

Into the bargain, we discovered fine lobster tacos at a dockside shack. 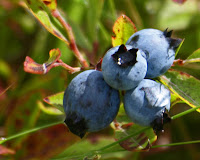 Another sunny day, we walked up a hill covered with blueberries, with views from the hilltop in all directions.

The farm stands were awash in blueberries, available for a pittance by the quart.

Why shouldn’t all climate and all music be equal
Without growing?  There should be an invariable balance of
Contentment to hold everything in place .  . .

One rainy day, we went into the little town of Rockland to the art museum and galleries; on another, we did nothing at all.  We put our feet up, books in hand, and between-times watched the tides. 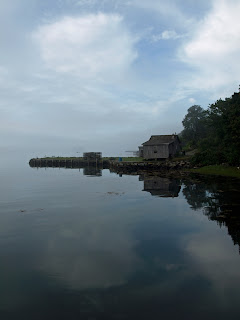 We could have told time by the tides, if we’d wanted.  But we didn’t.  That’s what a vacation is:  we felt time pass, but didn’t mark it.  We let it flow through us, like the tides.


. . . and you
Must wear them like clothing, moving in the shadow of
Your single and twin existence, waking in intact
Appreciation of it, while morning is still and before the body
Is changed by the faces of evening. 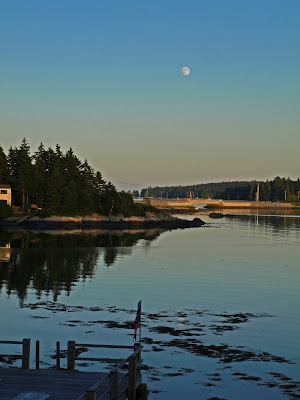 <<<>>>
Credits: The Ashbery quotation at the head of the post is from “How to Be a Difficult Poet,” Richard Kostelanetz (article and interview with John Ashbery), New York Times Magazine, May 23, 1976.  The Steinbeck quotation is from Tortilla Flat.  The remaining quotations are from Ashbery’s poem Clepsydra.

This is so beautiful the way you've interspersed the poetry with the photos and what you did that day. The perfect vacation is what it looks like.
I think I kind of agree with Steinbeck in that time feels more complex because it is so easily let go of near the sea and in turn when you stop to think it is complicated by the nearness of the waves, horizon, and land so that you get caught up in a moment and then move back to the idea of eternity and so on. Ah well...

I was going to disagree with Steinbeck until I read Towanda's comment. Hmmm.

The photos and poetry are so moving and serene. I especially love the one with the osprey!

Hello Susan:
The sea is endlessly fascinating and does, we feel, prompt all manner of thought, reflection and contemplation but whether more so than other 'scapes' is difficult to say.

Whatever, this is an absolutely magical post which combines the imagery of words with the loveliest of pictures in a most thoughtful and appealing way.

This is a wonderful post, lyrical, contemplative, and visually delightful. It speaks to me of being at peace with oneself and ones environment, the perfect holiday.

I have also clicked on Britten's Sea Pictures, magical music!

I really must get into Ashberry, he is almost unknown here.

As usual you unpack a complex idea with grace. And add your voice to the collective hum or art makers like Ashbery. I'll mull over that "hasn't the sky?" and your meditations for a while now... as we recover from the hurricane out here in Greenport!

Hi Susan .. this reminds me of Cornwall .. and the descriptive words, images and thoughts you evoke here are amazing - clepsydra .. is a great word. Time would have to stand still, while I remembered it!

Love the photos that illustrate your post so well .. great to see - thanks - Hilary

A lesson on how to make a great blog post. Thanks so much for sharing your photos, and of course I LOVE how you wove them with the poem. Thank you, Susan.

Superb photos again Susan! The Osprey is lovely, you are quite right to be proud of it! Like the Laughing Gull tugging on the weed, not sure what the other gull is, perhaps you could let me know?!
The landscape shots are beautiful, very atmospheric. You certainly live in a beautiful part of the world!
J
Follow me at HEDGELAND TALES

Greetings Susan,
Wonderful and brilliantly descriptive. I love the photos and I think you might realise my great affinity with the sea.
Maine, is indeed a beautiful location and I greatly appreciate your words and marvellous pictorials. Thanks Susan.
In kindness, Gary.

I didn't realise you had this blog. What a lovely surprise to see all your wonderful photographs, love the Blue Heron, amazing shots.
I shall go and enjoy seeing more. And thank you for your comments, always lovely to read.
milly

From the moment I saw the photo of the Pemaquid Point lighthouse and read the question, "Hasn't the sky?," so many windows re-opened for me that I don't know where to start!

First, recalling our conversation about your disappointment in not finding good photo ops, I must say that the photos in this post are all simply gorgeous and so, "Maine!"

The lighthouse scene took me right back to my stay at Pemaquid Point. Such fond memories of my real Maine experience. I am so happy that you were there, too, so that you could understand what I was raving about.

The veil of mist drifting into the bay; the fabulous blueberries; the glint in the Osprey's eye -- you perfectly captured the ME mystique. In fact, the Osprey shot is without doubt the best photograph of that bird that I've seen.

Then, the Ashbery sky question recalled an old docent ploy used to get the attention of a group of school children on a walk in the marsh. That question was: Where does the sky begin? All pointed upward and were simply astounded to find that they were actually in the sky which begins at the surface of the Earth and extends up into the stars.

Your narrative and poetry between the photos is a perfect blend of words and pictures. I hope thousands and thousands of people will get to see this post and will enjoy it as much as I. A link will be forwarded to get the ball rolling!

It's a good day here made more so by "Maine's Great Clepsydra."

Truly, a beautiful post, a lovely amalgam of image and word. It did make me smile to realize I disagree with the good Mr. Steinbeck, just a little.

I experience time as simplified on the water. Rising and falling tides are thoughtless and regular as human breath. The movement of the sun transforms every mast and deck into its own sundial, and the quality of the light marks the passage of seasons as surely as marks on a calendar.

At the shore - and perhaps everywhere in the natural world, if we allow it to happen - we begin to let go of the complexities we impose upon time and immerse ourselves into it, like the marvelous sea-creatures themselves.

On the ocean, at the shore, there can be found "an invariable balance of contentment". I hope someone's told John Ashbery.

Many thanks to all for the wonderful comments. The weaving of the Ashbery poem with the images and my own bit of text was a bit of an experiment. I couldn’t be sure whether it would work as I wished, so it’s particularly pleasing to learn you enjoyed it!

Towanda, Maggie, Jane & Lance, and Shoreacres: So interesting the different views of Steinbeck’s observation. I go back and forth, though in the end, I think there is complexity to the passage of time wherever you are, wherever you look, so, along with Jane and Lance, I don’t know that I can choose.

Friko: I’m pleased indeed not only that you thought well of the post, but that you were able, in this instance, to hear the music, which I know is not usually the case. I was glad to be reminded of Britten’s Interludes and find good examples to post. They are such beautiful pieces, aren’t they?

Suze: Oh, I do hope not sadly!

Elaine: Always lovely when you stop by. I love the idea of being part of the collective hum! As for the hurricane, I do hope that all was back to whatever passes for normal this weekend.

Hilary: Cornwall, yes I can see that. As for “clepsydra,” yes, isn’t it a wonderful word (new to me, as well)?

Mark: Well, Mark, you and the others commenting here have given me a multitude of lessons on how to write a good blog post. I’m particularly pleased this one succeeded, in your eyes, as you are the one who put me on to Ashbery!

John: I think the other gull is a herring gull, but I’m not nearly the champ at bird identification that you are, so I do recommend a second opinion on that one!

Gary: Indeed, you’ve written some lovely posts on the sea and provide inspiration to me in that regard. I’m very pleased to return the favor.

Milly: How nice of you to stop by, and glad you enjoyed the posts! Your drawings from nature are always a pleasure for me, as I hope you know.

cybersr: Your story from docenting days is wonderful, and worth a post of its own!

Of course until this all I could think of was rhyming 'Maine' with 'hurricane', courtesy of Bing and Frank's 'Well, did you evah', though I knew it was legendarily beautiful.

And glad we coincide re guillemots and eiders - I can't match you on the osprey or the birdsnapping front, though.