Will the “Real” Vinteuil Sonata Please Stand Up? 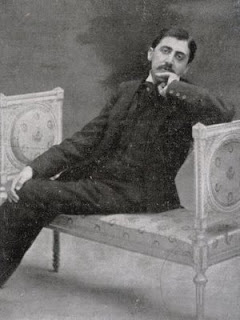 The year before, at an evening party, he had heard a piece of music played on the piano and violin. At first he had appreciated only the material quality of the sounds which those instruments secreted. . . . But then at a certain moment, without being able to distinguish any clear outline, or to give a name to what was pleasing him, suddenly enraptured, he had tried to grasp the phrase or harmony—he did not know which—that had just been played and that had opened and expanded his soul, as the fragrance of certain roses, wafted upon the moist air of evening, has the power of dilating one’s nostrils. . . . This time he had distinguished quite clearly a phrase which emerged for a few moments above the waves of sound.

Many origins of the petite phrase have been put forward, including Franck’s Violin Sonata in A Major (1886) and Fauré’s Ballade, for piano and orchestra, Op. 19 (1881). However, Proust was unequivocal about the origin of the petite phrase: as he wrote to Jacques de Lacretelle, “the ‘little phrase’ of the Sonata—and I have never said this to anyone—is . . . the charming but mediocre phrase of a violin sonata by Saint-Saëns, a musician I do not care for.”

Why would scholars keep searching for a source for this musical phrase if Proust identified it himself? And why would he, in the same breath, seem to cast aspersions on the composer of an idea that would have such profound ramifications for him? A possible source for both areas of confusion is a bit of autobiographical revisionism on Proust’s part. The cyclic theme that pervades Saint-Saëns’s Violin Sonata No. 1 in D Minor, Op. 75 (1885)—the very one that provided the inspiration for Vinteuil’s petite phrase—had earlier symbolized for Proust his passionate love for Reynaldo Hahn. . . . the memory of Saint-Saëns’s passionate sonata may have brought up a painfully acute remembrance of things past.

—The gospel according to Bardic sage Byron Adams

The phrases pointed to in the comments are below (though I am here operating way above my pay grade and am solely responsible if my editing to locate them isn't spot-on):


La petite phrase in the fourth movement (at time noted by Elaine Fine):

La petite phrase in the fourth movement (at time noted by David Nice):

An additional "little phrase" noted by David Nice:
<<<>>>
A Spotify playlist of pieces that were performed at the Proust and Music concert, along with the Franck Violin Sonata, can be found at Bard Proust and Music. At Bard, the Saint-Saëns Violin Sonata was given an electrifying performance by Eugene Drucker and Danny Driver. Credits: The image of Marcel Proust at the head of the post can be found here. The Proust quotation source is as indicated, one of several chosen by Larry Bensky, who moderated the pre-concert panel at the Proust and Music concert I refer to here. The quotation from Byron Adams can be found at pages 40-41 of the excellent Bard Music Festival 2012 program book.

<<<>>>
Although I may post something of note that occurs during this period, Prufrock’s Dilemma generally remains on hiatus, and I will be mostly offline through Labor Day (U. S. version) weekend. Thereafter, a “new edition” of Prufrock’s Dilemma will begin.
Posted by Susan Scheid at 5:23 PM

Hi Susan,
And whilst you remain in hiatus, I listen to your latest musical offering and continue to be inspired by such music that fits so well with my own eclectic tastes.
May your Labor Day, North American version, be peaceful and reflective.
In kindness and admiration, Gary

Sue- I liked it. The violin and the piano. Classic but elemental. Sometimes we can over think stuff. Maybe Proust should go with the flow.

Dear Sue,
"In your country this video is not available" - sorry, we often see this label in Germany :-(
As I understood it, Hahn and Proust remained friends after the first two years of passionate love (I repeat only what Wiki said) - so why harm a friend? Or turned passionate love into passionate hate?

So there we have it - couldn't be clearer, and in writing too. Thank you for so flavoursome an answer. I always trust the Bardic polymath-sage.

Sue- After listening to the piece again,I hope that doesn't come off as too simple and sarcastic. He originally liked the sound. Me too. I guess it's okay to dig deeper. Maybe the phrase and scent is already right in front of you.

I wish I were half as clever and informed as you are.

I love how you tease us with these little gems while you remain on hiatus. ;)

(It's a beautiful piece, by the way.)

Hi Susan .. petite phrase - even those of us un-musical beings get that feeling at times - just that exhilarance of feeling wafting through - remaining ephemeral as it enters our consciousness ..

The instant that I read about the "little phrase" (it was in the summer of 1982, and I was in New York) that theme from the last movement from the Saint-Saens D-minor came immediately to mind. I have never thought it to be anything else.

One candidate for the phrase is at 1:26 of the first movement of the recording you have in the post (with an accent on the term petite), but the thing that really grabs me as the "stand out" madeleine phrase is at 5:09 of the third video (3/3). It peaks in the violin at 5:20, and then moves to the piano through 6:00, while the violin does an obbligato over it.

He does exploit that theme all the way through, long after the 6:00.

By 'cyclic', Byron was referring to the candidate you put up in the sidebar - lovely tune that's the second theme of the first movement - popping up in the finale (at 7'31). With respect to Elaine Fine, that grand theme in the finale doesn't stick in my mind so much (but that's just me).

FWIW, there's one 'little phrase' of six notes which the piano plays very briefly in the slow movement - at 3'22 of the second YouTube excerpt - which I find surprising; it's almost like Elgar in nostalgic mode. That's the one I feel Elgar would have brought back, a la Cello Concerto.

Anyway, how clever of you to excerpt YouTube - your mastery of all the available technology amazes me.

As I come out of hibernation, my grateful thanks to each of you for taking the time to comment on my little “hiatus” posts, including this one. My especial thanks, on this post, must go to Elaine Fine and David Nice for their insights into the location of the “petite phrase,” and to David for pointing out, also, the delectable theme from the second movement.

FYI to all, I can’t take credit for any technical prowess in editing the youtube clips—the Edu-Mate is the one who put me onto “tubechop,” a simple and effective tool (so long as one has expert guidance, as I did here, on the minute/second interval from which to start chopping).

Most of all, I learn from this conversation, once again, that a piece of music as good as this one yields up new treasures on repeated listenings. I found this sonata lovely on first hearing, but now it is much more than that, so I would have to say that I disagree with Proust on the subject. But then we know, from Bardic sage Adams, that Proust likely wrote as he did in a fit of melancholic pique . . .